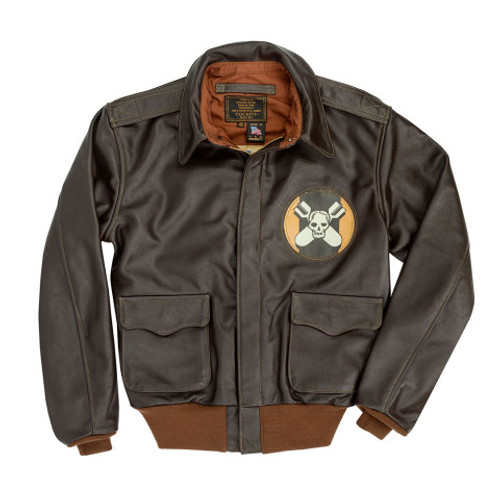 A tribute to the crew of the Boeing B-17G aka “Aces & Eights,” Cockpit USA's Aces & Eights Flight Jacket commemorates their bravery and sacrifice during WWII.

The “Aces & Eights” crew was assigned to the 379th Bomb Group, 527th Bomb Squadron, and 8th Air Force stationed at the Royal Air Force Kimbolton Air Field in Cambridgeshire, England. Its crew flew over 30 combat missions and contributed to the 379th's record as the most successful bomb group in the Eighth Air Force by war's end. Sadly the “Aces & Eights” was lost along with its crew during a training flight in England on May 1944.

The sacrifice and legacy of this outstanding crew will not be forgotten and Cockpit USA honors its heroes through their latest addition.

Proudly Made in The USA, the Aces & Eights A-2 jacket is crafted from brown horsehide leather featuring a front chest patch and a screen printed Aces & Eights nose art design on its back.

Made for those who honor heritage, the Aces & Eights A-2 Jacket is an iconic piece to own for years to come.

NOTE:
Since Cockpit USA items are made in the USA, please expect delivery within 2-3 weeks if your size is back ordered as they rush to produce. Should it take longer we will advise you personally. We appreciate your patience. Know that Cockpit USA produces the best quality flight apparel and we want to make sure you are satisfied.